In a way analogous to Laser WakeField Accelerators (LWFA), waves of electron density in the plasma can also be driven by the passage of a relativistic beam of charged particles, the “driver”. For very dense electron beam drivers, the plasma wave takes the form of an ion cavity (see figure), in the so-called blow-out regime. This ion cavity has ideal properties to accelerate the main electron beam, the “trailing” electron bunch, and the near-speed-of-light phase velocity of the plasma wave prevents dephasing between the trailing bunch and the plasma wave and therefore enables acceleration over longer distances in comparison to LWFA. The UPX group is exploring the physics of PWFA and intense beam-plasma interaction using both accelerator and laser facilities:

– Based on experiments conducted on the FACET-II accelerator facility at Stanford with an international collaboration (SLAC, UCLA, CU Boulder, U. Oslo, Stony Brook U., MPIK, CEA, LOA), the group aims at understanding the physics of beam-plasma interaction and at the experimental realization of a plasma accelerator module that would be capable of accelerating a distinct bunch of particles, with high energy gain, low energy spread, high energy efficiency, and preserved emittance. In this perspective, betatron radiation emitted by the trailing beam can be used to provide information on the beam dynamics in the plasma and the matching conditions, and to find optimal conditions for emittance preservation in PWFA. This research is conducted in the context of the E-300 experiment at SLAC.

During the interaction of a dense relativistic electron beam and a high-density plasma, under suitable conditions the current filamentation instability and oblique instability can lead to the growth of strong electromagnetic fields and to the emission of bright gamma rays. Understanding the interplay and nonlinear evolution of the competing instabilities under various physical conditions is of fundamental interest for astrophysics. This research is conducted in the context of the E-305 experiment.

– PWFA can also be studied using high-power laser systems like Salle Jaune by staging LWFA and PWFA. Such hybrid wakefield accelerators, where a LWFA electron beam drives a PWFA section, open the opportunity to study PWFA physics using in-house compact laser facilities and to leverage the advantages of PWFA, for example for the generation of ultra-bright particle beams. The flexibility of LWFA and PWFA staging allows various controlled trailing beam injection techniques, including both internal and external methods. This research on hybrid LWFA-PWFA is conducted in collaboration with HZDR, LMU and DESY in Germany and University of Strathclyde in the UK, with in particular the first experimental demonstration of the acceleration of an electron beam in such a hybrid wakefield accelerator. 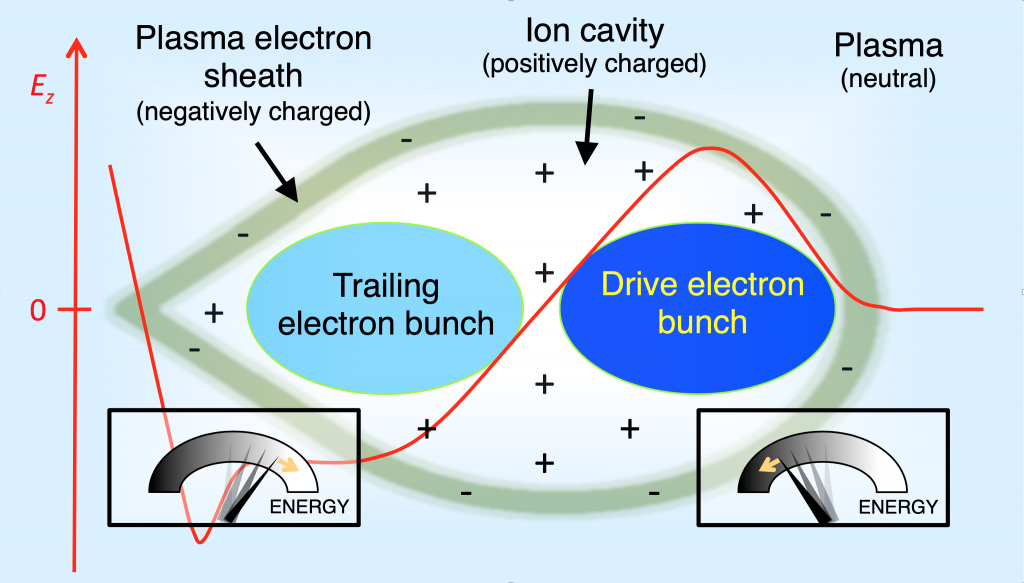 The group is also interested in the study of filamentation instabilities at femtosecond time scale in the context of relativistic laser-solid interaction, in particular using LWFA electron bunches for ultrafast probing of magnetic field structures developing in the vicinity of the laser-irradiated solid surface (see figure). While being analog to the E-305 experiment, in this case the unstable system consists of forward-directed laser-accelerated fast electrons and current-neutralizing, cold plasma electrons, and as such is intrinsically related to the instability-driving laser pulse. 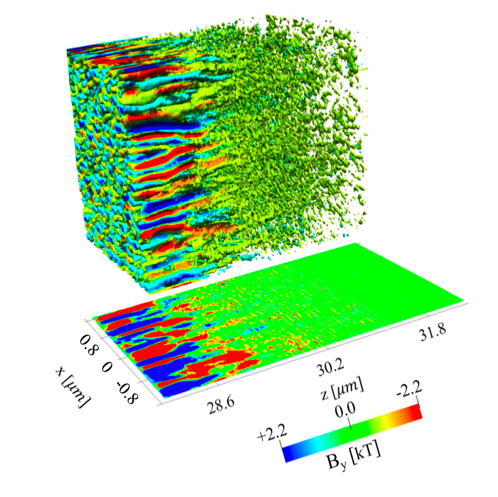 In addition to these experimental activities, the group is also contributing in the theoretical and advanced numerical modeling of beam-plasma interaction. This activity includes the topic of hybrid LWFA-PWFA, the acceleration of positrons in plasmas as well as electromagnetic plasma instabilities developing during the interaction between laser, particle beam and plasma. In particular, comprehensive studies using 3D Particle-In-Cell modelling are conducted to better understand the growth and interplay of different modes of instability in extreme beam-plasma systems. This work is conducted in close collaboration with CEA in France.