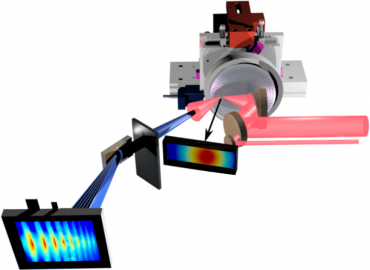 When focusing the “Salle Noire” laser with an off-axis parabola of aperture f/1.5 onto the surface of a solid target (typically polished glass), the so-created plasma is very dense and prevents the laser from propagating further, without hower absorbing it: it reflects the laser light. We speak of a plasma mirror, whose electrons are getting shaken by the laser field’s oscillations in a such way that the mirror surface oscillates with a velocity near the speed of light. The principle of relativity then leads to the reflected light’s oscillation cycles being compressed in time, giving rise to light flashes of even shorter duration than the laser itself, in the attosecond range, and containing ultraviolet (UV) and extreme-ultraviolet (XUV) spectral components. At the same time, during its reflection off the plasma mirror, the laser accelerates relativistic electron bunches of femtosecond duration as well as bunches of protons other ions.

Oftentimes, the target is getting pre-ionised with a low-energy laser laser pulse preceding the ultra-intense main pulse by a few picoseconds. This controls with nanometer precision the plasma surface density gradient, which is a crucial parameter in the laser-plasma interaction.

For a laser pulse with of duration similar to an optical cycle, the carrier-envelope phase drastically influences the driven plasma dynamics. The Salle Noire laser is capable of controlling this phase and allows observing different phenomena that depend on it. Experimentally, we can for example measure a continuous XUV spectrum (phase 0) or a modulated spectrum (opposite phase), corresponding to an isolated attosecond pulse or a pair of attosecond pulses, respectively.

The interpretation of our experimental results is supported by simulations performed by colleagues. For example this simulation of the reflection of a relativistic-intensity laser pulse of 3.5 fs (1.5 optical cycles) duration, made by Maxence Thévenet of the Lawrence Berkeley National Laboratory, shows well the temporal compression of the reflected pulse, represented here by the modulus of it magnetic field:

More details are visible in this video showing a zoomed-in view of the interaction between a plasma mirror and a 25-fs laser pulse (about 10 optical cycles), with only the magnetic field of the newly generated XUV spectral components represented, as well as the electron density in a gray-scale: