When a vehicle moves in atmosphere with a supersonic velocity, a shock wave is generated, leading to a considerable increase its drag and to its consumption of fuel. Several authors had suggested that depositing laser energy in the form of a long plasma column could decrease the drag by reducing the pressure at the nose of the object. Femtosecond filamentation appeared to be the best candidate to produce this plasma, but former estimations made in 2010 concluded that a femtosecond laser alone could not depose enough energy to produce a significant effect. However, in 2015, the results obtained during the PhD of Guillaume Point allowed us to reactivate the project with ONERA [PointPRL]. We showed evidence of a superfilamentation regime with terawatt laser pulses, in which the intensity exceeds the clamping value of classical filaments, resulting in a very efficient energy deposition [PointJPB]. An ANR funding has been obtained in 2016 to perform tests in the supersonic wind tunnel of ONERA Meudon with the ENSTAmobile laser, in collaboration with the company Phasics. This experiment was very successful since we demonstrated a transient reduction of the drag of a supersonic vehicle by 50 % in the presence of the filament. A manuscript detailing the results is currently in preparation for Science [Elias2018]. The next step will now consist in increasing the repetition rate of the laser to obtain a permanent effect on the drag and to test the ability of this laser spike to control the trajectory of the vehicle. 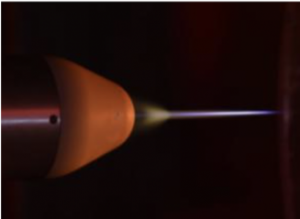 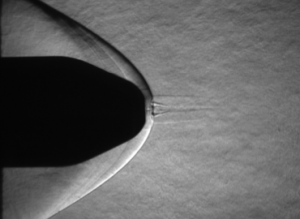 Left: Still photography of the filament produced in front of the blunt body. Right: Schlieren image showing the perturbation of the shockwave by the filament in the presence of the Mach3 airflow.