Control of electric discharges with laser

A striking feature of femtosecond filament is their abilities to trigger and to guide electric discharges in the atmosphere. In the last 20 years, a large number of experiments have been made using femtosecond TW filamentation to control electric discharges. In 2013, we demonstrated that filament could be used to trigger high current sparks with an unprecedented low jitter [Link]. This effect has been used in 2014 to build a multi-stage Marx generator triggered in atmospheric air by a single filament [link]. Voltage pulses of 180 kV could be produced by this generator with a sub-nanosecond jitter.

In collaboration with DGA we also demonstrate the possibility to use these guided discharges as virtual plasma antenna for RF emission [link].

In parallel, in collaboration with Airbus Innovation, we demonstrated during a campaign on the campus that it is possible to trigger electric discharges between charged electrodes at distances reaching 500 m by sending a multi-terawatt laser pulse. In the center for aeronautic test of Toulouse (DGATA), we also demonstrated the full guiding of a 4-meter-long electric discharge with filament, which is now the world record. Finally, using a kHz, 200 mJ laser of Trumpf scientific, we demonstrated that the breakdown voltage could be decrease by a factor 3 using a kHz laser with respect to a 10 Hz laser [Link]. 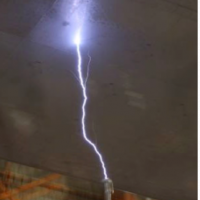 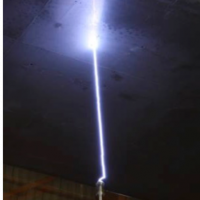