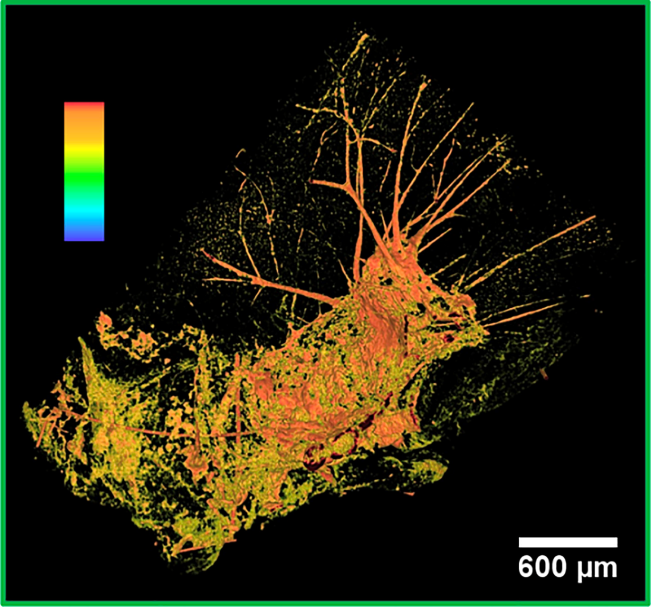 3D imaging with micrometer resolution of nanoparticles in cancer metastases

Radiotherapy treatment of cancer can be enhanced using injected nano-particles that accumulate inside the cancerous cells. This method currently moves from the laboratory to hospitals. However, for the development of this new radiological protocol, it is of fundamental importance to measure, in 3D, how the nano-particles distribute in tumors and metastases. A non-destructive and non-invasive method capable of 3D-imaging a large cm-scale region with a resolution between 1 and 100 microns and sufficient contrast has thus far been absent.

Elena Longo and Philippe Zeitoun of LOA’s FLUX group have, in collaboration with colleagues from France, Italy, Russia, the UK and Germany, demonstrated that X-ray phase-contrast tomography is well-suited to fill this gap. They used this method at the ID17 beamline of the European Synchrotron Radiation Facility (ESRF) in Grenoble to image for the first time with micrometer resolution the uptake of gadolinium-based nano-particles in melanoma metastases over a full mouse brain. Their results revealed, with much higher spatial resolution than magnetic resonance imaging, a heterogeneous distribution inside the metastases that may impact the radiotherapy efficiency. This demonstrates that X-ray phase-contrast tomography is a reliable technique for nano-particle imaging a promising emerging method for the study of their distribution in organs.