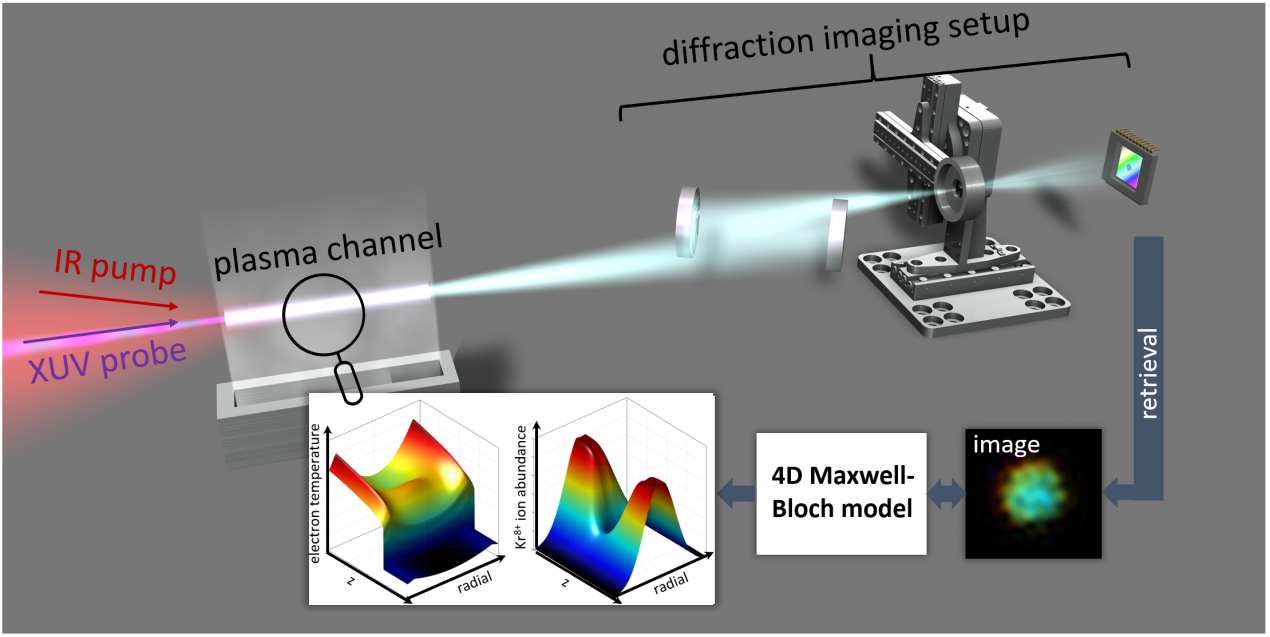 Seeing inside a hot dense plasma

The most common state of observable matter in the universe is by far ionized particles, or plasmas. Thus, a profound understanding of ionized matter and its interaction with light could lead to a deeper grasp of the relationships at play that formed the universe. While plasmas are relatively easy to generate in the lab, studying them is extremely challenging. This is because a high density makes plasmas opaque to visible light, and the turbulent nature of gaseous media and rapid variations of the plasma properties require specifically adapted methods.

In a new article published in Light: Science & Applications, researchers of LOA’s UPX group together with international collaborators from UC Berkeley, U Jena and UP Madrid report on directly observing the formation and interaction of highly ionized krypton plasma using coherent extreme ultraviolet (XUV) light in combination with extensive numerical modelling.

In the experiment performed at the LOA, we employed a laser-generated krypton plasma as an XUV laser medium. A coherent XUV probe pulse launched into this plasma picked up signatures of the plasma conditions along its propagation and was then analyzed by a method known as coherent diffraction imaging, affording very high resolution. We found an unexpected spatial modulation pattern which, with the aid of an adapted ab initio theory modelling, we could ascribe to a strongly nonlinear behavior in laser-plasma interaction generating the highly-ionized krypton plasma.

This experimental approach can easily be adopted to other relevant scenarios and validates the advanced ab initio models used to simulate the laser-plasma interaction, and more generally the formation of highly-ionized plasma. Beyond a more profound understanding of laser-plasma interactions, these findings can have impacts, for example, on the upscaling of plasma-based X-ray light sources or plasma-based fusion experiments.