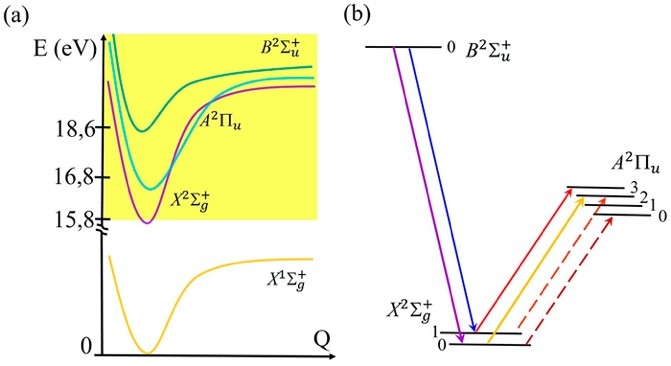 Cavity-free lasing of Nitrogen and laser gain without population inversion

The blue “air laser”, or more specifically the lasing emission at 391 nm from remotely excited ionized nitrogen molecules, has attracted great interest over the last decade. While it has been experimentally demonstrated many times, the physics at play has remained controversial.

In 2019 the F-ILM group at LOA has proposed that the strong optical gain at 391 nm observed inside a nitrogen plasma created by a short intense femtosecond laser pulse at 800 nm could be explained by a three-level V-scheme arrangement without population inversion [1]. In a recent article published in Optics Letters the same group reports on the strong quenching of this laser emission when a second delayed femtosecond pump pulse at 800 nm is injected in the plasma. This surprising effect is fully explained by the three level V-scheme and provides strong support to the interpretation of the lasing scheme without population inversion.  A scenario with no electronic population inversion is especially interesting since by upgrading the photon energy from pump to emission, it offers a venue for amplifiers in the X-ray or G-ray domain, where population inversion is difficult to achieve.