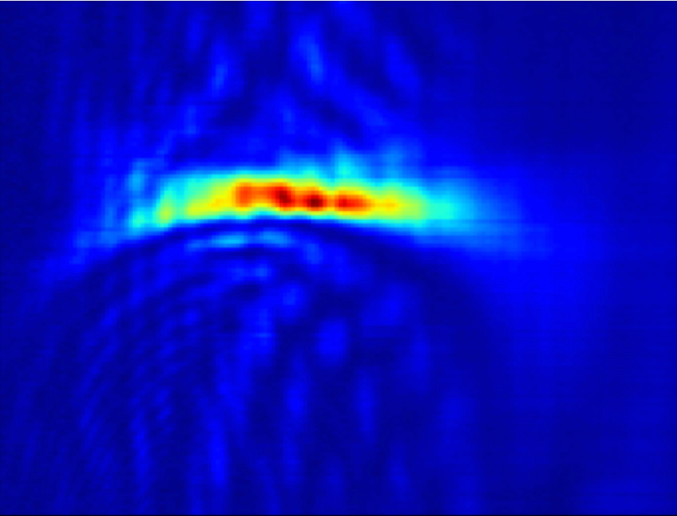 The development of ultra-intense and ultra-short light sources is currently a subject of intense research driven by the discovery of novel phenomena in the realm of relativistic optics, such as the production of ultrafast energetic particle and radiation beams for applications. It has been a long-standing challenge to unite two hitherto distinct classes of light sources: those achieving relativistic intensity and those with pulse durations approaching a single light cycle. While the former class traditionally involves large-scale amplification chains, the latter class places high demand on the spatiotemporal control of the electromagnetic laser field.

At the Laboratoire d’Optique Appliquée (LOA), the most recent development stage of the “Salle Noire”-laser achieves this for the first time by producing waveform-controlled 1.5-cycle pulses (719 nm central wavelength) with terawatt peak power that can be focused to relativistic intensity at a 1 kHz repetition rate.

The system is based on the combination of a high-contrast Ti:sapphire double-CPA chain delivering 24-fs pulses with 10 mJ energy (shot-to-shot stability of <0.3 % rms over hours) at a 1-kHz repetition rate with a temporal contrast of >1010 at ≈ -10 ps before the pulse peak. This seed-laser is post-compressed in a fully vacuum-integrated beamline developed in collaboration with the Laser-Laboratorium Göttingen and the Max-Born-Institut Berlin. Three strategies are combined to scale the SPM-based post-compression in hollow-core fibers (HCF) to the high achieved peak power. First, a stretched flexible HCF enables an arbitrary waveguide length without degradation of the waveguiding properties. The HCF dimensions were scaled to 2.5 m length and 536 μm inner diameter.  Second, high-purity helium gas is differentially pumped through the HCF, thus forming a stable pressure gradient across the waveguide. The low pressure at the fiber entrance prevents undesirable nonlinear phenomena and enhances the coupling efficiency and stability. Third, both multi-photon ionization and self-focusing are further mitigated by using circular polarization, achieved by placing two broadband quarter-wave plates before and after the HCF.

Six pairs of highly dispersive double-angle chirped mirrors (PC70, Ultrafast Innovations) in combination with a wedge pair accurately compensate both the GDD and TOD, as measured with an in-vacuum dispersion-scan device (Sphere Ultrafast Photonics). With 1.3 bar helium pressure at the fiber exit, the minimum achievable FWHM pulse duration of our system is 3.4 fs, close to the Fourier limit of 2.9 fs. These pulses have 3.5-mJ energy, with a pulse-to-pulse stability of ≈ 0.4 % rms, and can be CEP-locked with a residual noise of 152 mrad (average over 30 shots).

The unique capabilities of this source allow us to observe the first experimental indications of light waveform effects in laser wakefield acceleration of relativistic energy electrons.

LOA is continuing the development of this laser and targets in particular a further energy increase and improved robustness of the CEP locking.