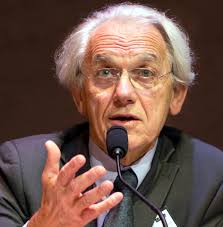 Gérard Mourou is the co-inventor, joint work with Donna Strickland, of the Chirped Pulse Amplification (CPA) technique (thirty years ago). This technique rendered possible the amplification of short laser pulses (a few dozen femtoseconds; 1fs = 10^(-15) s) up to extremely high peak powers, equal to a petawatt (1PW = 10^(15)W) or even more. The principle: temporarily spread an ultra-short pulse by means of an optical network in order to reduce its actual intensity before magnifying it. The pulse is then recompressed to reach intensities a conventional amplification would not make it possible to reach.
The CPA technique revolutionized the field of laser science and found new applications in different branches of Physics like in laser-produced plasma research.
After the start of his carreer at LOA in the late seventies, Gérard Mourou spent a large part of his career in the United States, in particular at the University of Rochester and Michigan. Back in France and in LOA in 2005, he was in charge of the lab until 2008. During this time, he initiated at LOA the research program on high repetition rate and intense laser systems with pulse durations of few optical cycles. With the LOA team, he also launched the PW Apollon laser program, now located in the Saclay plateau as well as the Large European infrastructure ELI (Extreme Light Infrastructure ), the world’s largest ultrafast lasers, that will be hosted  in Hungary, Romania, and Czech Republic.