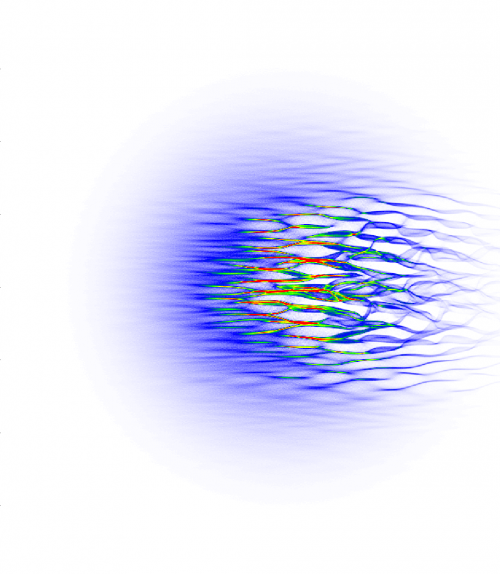 A large variety of physical processes can arise in the interaction of a relativistic particle beam with plasmas. In most of these processes the col- lective plasma response to the beam’s charge and current can act as efficient mechanisms to transform the beam energy into large amplitude electromagnetic fields. Having a good understanding of these mecha- nisms allows on the one hand to develop new experi- mental techniques based on these fields, and on the other hand to improve the astrophysical models where similar mechanisms play an important role. This ma- nuscript focuses on two of those processes and the programmed experiments at the FACET-II accelerator facility: plasma wakefield excitation and beam-plasma instabilities.

The beam-driven plasma wakefield acceleration tech- nique is now-a-days one of the most promising alter- natives to conventional accelerators. With accelera- tion gradients up to four orders of magnitude larger than in an RF-cavity, this technique could significantly reduce the size and cost of high energy particle ac-

celerators. Yet, several experimental milestones need to be achieved to demonstrate that the PWFA concept can perform at the required level of reproducibility and beam control and quality for societal, industrial and high energy physics applications. In this manuscript we propose via simulations a new non-destructive radiation-based method to diagnose beam transverse dynamics in a non-linear PWFA stage that can be de- trimental for the accelerated beam quality.

The beam-plasma instabilities are often studied in un- bounded systems. In the ultra-relativistic limit, the so- called ”oblique instability” is though to mediate the early stage of the interaction. In this manuscript the effects of the system boundaries on the oblique uns- table modes are studied, namely a novel spatiotem- poral theory is developed. Repercussion on experi- mental systems aiming to study these processes are discussed. Finally, a laser-based platform to study plasma streaming instabilities is presented together with experimental results.